Once again I am on a train. I think that I seem to write better on a train. Maybe because I’m captive and I can’t move and there are no animals or children around to distract me!  Being captive like this means I get time to think a bit (dangerous I know) and quite frankly writing this blog helping to distract me from thinking about the smelly individual sat next to me!

So last month I took part in the NFU’s Back British farming day. I want to follow this up with a call to all my readers and followers to keep up the momentum of this. It is more important now than it ever has been to support our farmers, and to buy British. We are in unprecedented times: more than 1000 farms have closed in the past three years. One in five dairy farms are set to close in the near future and we are being told that we are facing a butter and cream shortage this Christmas.

I wonder if this is an insight into our food producing future.  I hope not.  What will happen when we no longer have enough dairy farmers to produce our milk? What will happen when our pig farmers shut up shop? What will happen if those arable farmers give up, as yet again the great British summer has done its worst, and they have been paid peanuts for what crop is left? There have been times where I’ve had conversations with people that have enraged me.  Their answer to farmers who struggle to survive is to sell up and become millionaires as a farmer’s land is worth loads! Well that’s all well and good, but who’s going to grow our food?

The answer I hear most frequently is “Ok, well we can just import our food, right?”

In the UK we have some of the strictest food and animal welfare regulations in the world. This means that our animals are kept to the highest of welfare standards, and the food that is produced is not full of antibiotics, harmful chemicals and other nasties. What this also means is that it costs more to produce such a natural, high quality food source. Now I am not going to make out that all imported food is full of nasties, but let’s think about the current row about American chicken that is being discussed as a result of Brexit and free trade. America want to import their chicken to the UK.  On the surface, that’s fine, but it is common US practice to wash chicken in chlorine. I don’t know about you, but I just don’t fancy that.

Food security
Have you thought about what would happen if we couldn’t import food? Say some catastrophic event means that importing food is not an option. (The North Korean rocket man setting off a nuke?) If all of our farmers are gone, what happens next? We are presently only producing 61% of our own food. That means we import 39% of what we use in this county. That’s a huge amount, and the more farms that go out of business, the more this number will increase.

So what is the answer?
There will not be a quick fix to stop farms going out of business. Years of poor returns are pushing people to the brink, and for some, there are no other options. But we can all do our part to help, and here are a few ideas how.

Buy British
Backing British Farming means buying food produced by a farmer in the UK, from a verifiable source. By buying a UK farmer’s produce, you are helping to ensure there is a demand for their product, and you are helping to get them a fair price for that product.

Eat seasonally
Hands up how many of us buy tomatoes from the supermarket that taste frankly awful, check the packaging and realise that they have been shipped from some far away land? The seasonality of food refers to the time of year where the harvest or flavour of the produce is at its best. So the idea of eating seasonally is to eat fresher and tastier food that hasn’t travelled miles (which you pay a premium for).  At the same time this helps to support British farmers who are growing the produce.

So now it’s over to you Out and About followers; #backbritishfarming and show British farmers your support.
I would love to hear your views on buying British produce and seasonal eatings.

You may also enjoy: 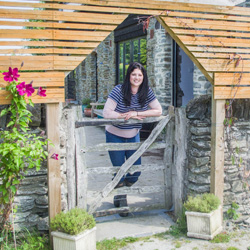 Hi, I’m Jade and I am the farmer behind Out and About Poultry.

Having quit a career in finance to farm I have also found a passion for writing that I never knew existed. My blog follows the journey through a year of rearing turkeys and geese from day one to the dinner table. I am a passionate supporter of British farming and the people behind it and I am an eco Mum trying to do her bit to reduce my families footprint on planet earth.